What is CPR? Cardiopulmonary Resuscitation 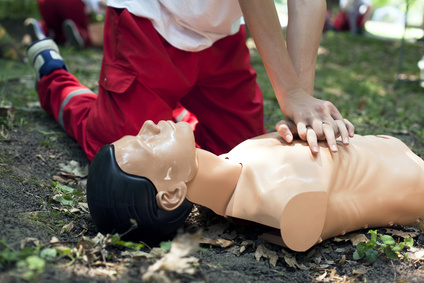 Cardiopulmonary Resuscitation – With more than 350,000 cardiac arrests occurring outside of hospitals every single year, CPR has never been a more vital first aid skill. Unfortunately, almost 90% of out-of-hospital cardiac arrest victims die as a result of not getting the urgent CPR needed to save their lives, which is a sure sign that more people need to learn about CPR and how to successfully deliver it.

Do you need CPR training? First, let’s answer the most important questions: what is CPR and why is it so important?

Cardiopulmonary resuscitation is the process of delivering life-saving emergency aid to individuals who are suffering cardiac arrest.

Cardiac arrest occurs when the heart stops beating normally and fails to deliver blood successfully throughout the body. This causes the individual to lose consciousness and stop breathing, and it results in the body’s organs shutting down due to lack of oxygen.

If left untreated, a cardiac arrest can cause victims to die within minutes. Not only that, but the longer an individual remains unconscious without oxygenated blood reaching their brain, the more likely they will be to suffer brain damage. This is why rapid delivery of CPR is so vital when individuals become unconscious and stop breathing.

CPR is designed to work in two ways: to restore a normal rhythm to the heart and get blood pumping again, and to deliver increased oxygen to the lungs and, therefore, throughout the body. It comprises of two key techniques: compressing the chest, and delivering mouth-to-mouth rescue breathing.

The origins of CPR go back as far as the 1700s, when, in 1740, the Paris Academy of Sciences began to officially recommended a form of mouth-to-mouth for the resuscitation of drowning victims.

In 1767, a group in Amsterdam called the Society for Recovery of Drowned Persons also adopted the method for responding to cases of sudden death, but it was just one of several techniques the group recommended. They also tried tickling the unconscious person’s throat, bloodletting, warming the body, adjusting body position to remove swallowed water, using bellow to drive tobacco smoke to the intestine and applying pressure to the abdomen. The latter is a crude, early form of the chest compressions used today.

The group demonstrated enough success in their techniques that other rescue societies began to emerge throughout Europe, some of which attempted to share knowledge about their resuscitation methods with the general public. In 1769, an ordinance in Hamburg, Germany, ensured that notices were read in churches to describe how the public could attempt to resuscitate individuals who had drowned, been strangled, frozen or afflicted by harmful gases.

Breakthrough in chest compressions in 1800s

Throughout the 1800s, resuscitation was investigated by various medical experts throughout Europe, with their focus being on ventilation. The likes of Leroy d’Etiollcs and Janos Balassa proved to have some success in their attempts to manipulate ventilation in patients who had suddenly died, but their focus on ventilatory assistance was a little off the mark.

It was Professor Franz Koenig, from Germany, who examined the idea of compression of the heart region as an alternative to ventilatory assistance. He proposed that the chest should be compressed at the same rate at which an individual would normally breathe, but the technique wasn’t wholly effective; he found that patients either responded well within a few minutes, or not at all.

It was Koenig’s surgical assistant, Dr. Friedrich Maass, who in 1891 documented the very first use of the chest compressions we still use today in modern CPR. He performed the compressions upon a nine year old boy who was due to have surgery performed to correct a cleft palate. The boy didn’t respond well to anesthesia, and additional doses of chloroform were required before he fell unconscious. The patient then had a poor reaction to the extra chloroform: his lips turned blue, his pupils dilated and, although shallow breathing was detected, he did not have a pulse.

When Professor Koenig’s compression technique proved unsuccessful in restoring the pulse, the boy was moved out of the operating room in order to make way for another patient. At this stage, surgical assistant Maass should have considered the patient dead, but instead he continued to work on the boy. In his desperation to save the boy’s life, he delivered the compressions far faster and more vigorously than before, and he soon noticed that the boy’s pupils constricted. He continued to work at a rapid speed, and found that during pauses of the compressions, the boy began to breathe more deeply.

Within 30 minutes, Maass was able to restore the boy’s pulse and the color returned to his lips. The boy made a gradual but full recovery and was discharged from the hospital a little over a month later.

Maass was able to put his technique to the test a second time, this time on an 18 year old boy. Once again, Professor Koenig’s method of compressions were used first, but when it proved unsuccessful Maass’ technique was quickly taken up. The teenager’s pulse was restored and he too made a full recovery.

Development of modern CPR in the 1950s

Unfortunately, Maass’ discovery wasn’t widely adopted, most likely because the medical community did not yet fully understand the cause of sudden cardiac death. This made it incredibly difficult to research the technique and establish best practices.

However, by the 1950s, scientists and doctors began to focus their efforts upon treating acute cardiac arrest. Doctors James Elam, Peter Safar and Archer S. Gordon are all particularly well-known for their efforts in studying resuscitation methods and educating the public about them.

In 1954, Elam proved that adequate oxygenation of the blood was possible via expired air, which lead to him inventing, with the help of Safar, a safe and effective mouth-to-mouth resuscitation protocol in 1956. A year later, the technique was adopted by the US military to resuscitate unresponsive soldiers.

The American Red Cross and similar organizations began to teach the rescue breathing technique in order to better equip the general public in responding to sudden cardiac arrest. In 1959 the state Health Commissioner, Herman Hilliboe, commissioned Elam to create an instructional booklet on the technique which was distributed throughout the country. Instructional films were later made by Elam to further bolster attempts to popularize the technique. By 1960, rescue breathing had become the preferred resuscitation method of the American Red Cross, American Society of Anesthesiologists, the National Academy of Science and Medical Society of the State of New York.

Meanwhile, William Bennett Kouwenhoven, Guy Knickerbocker, and James Jude began to experiment with chest compressions for treating cardiac arrest at John Hopkins University. Having noticed that they could achieve a pulse in a dog while studying defibrillation, they began to experiment with location, speed and depth of compressions on canine subjects. Eventually they became ready to trial their technique on humans, and in 1960 they published a report which demonstrated a 70% survival rate on 20 cases of in-hospital cardiac arrests.

In 1960, at the annual Maryland Medical Society meeting, rescue breathing and chest compressions were united, when Safar, Jude and Kouwenhoven began to work together to combine the two techniques. They established that ventilation and circulation were both of great importance in treating cardiac arrest, and the technique we know today as CPR – cardiopulmonary resuscitation – was created.

How to perform CPR

Individuals who are not trained in CPR, or who have had training in the past but do not feel confident in their technique, should provide hands-only CPR. Those who are trained are able to deliver hand and mouth CPR, which may be more effective. However, hands-only CPR is still incredibly important for maximizing the chances of survival during cardiac arrest.

Firstly, place the victim on their back on a firm surface – usually on the floor. Kneeling next to the victim’s neck and shoulders, you should place the heel of one hand on the center of their chest, between the pectorals. Then, place your other hand directly on top of the first.

With your shoulders positioned directly over the hands and elbows straight, push straight down on the chest at least two inches (5cm) but no greater than 2.4 inches (6cm). You should use your upper body weight to compress the chest, and continue the compressions at a rate of 100 to 120 per minute – around two compressions per second. This should be continued until there are signs of movement in the victim or until a medical professional can take over.

In children, the same chest compression technique should be used. However, if they are very small, one hand may be enough to deliver adequate compression without risking harm to them. With babies, two fingers of one hand is adequate, and compressions should be gentle; the chest should not compress more than 1.5 inches (4cm).

Those who have been trained in CPR via an accredited training course can deliver rescue breathing as well as chest compressions.

The American Heart Association advises that you follow the CAB acronym:

Firstly, 30 chest compressions should be delivered, as described above, before the airway is checked and mouth-to-mouth breathing is delivered.

To check an airway, one must tilt the head backwards and lift the chin. This technique can be difficult to do correctly unless adequate CPR training has been provided, which is why it is best practice to perform chest compressions only if you have not had CPR training. Trained individuals will also be equipped to recognize normal and abnormal breathing; they will look out for motion in the chest, listen for breath sounds and place their cheek or ear near the victim’s mouth to feel for breath.

Gasping sounds may occur in victims of cardiac arrest, but this is not deemed normal breathing. If the patient is gasping or is not breathing at all, mouth-to-mouth should be performed.

While delivering the first breath, the rescuer should watch the chest to see if it rises. If it does so, a second breath should be given, before beginning the CAB cycle again, starting with 30 more chest compressions.

If the chest failed to rise upon the first rescue breath, the rescuer should repeat the head-tilt, chin-lift maneuver before performing the second breath, then begin the CAB cycle once again with chest compressions.

The cycle of 30 chest compressions, checking airways and two rescue breaths should be continued until there are signs of movement in the victim, or until emergency medical personnel arrive to take over. If an AED is available (automated external defibrillator), the rescuer should perform five cycles of CPR initially before using the AED if the victim remains unresponsive.

AEDs are often found in public areas such as train stations, schools and shopping malls. They work by delivering a controlled electric shock to the victim to restore a normal heart rhythm.

Individuals who are trained in CPR may also be trained in the use of AEDs, but those who aren’t may still be able to use an AED successfully. Often, they are designed with simple user interfaces and have visual cues to allow the rescuer to use them correctly and safely. A 911 operator may also be able to help guide you through the use of the AED. If in doubt, continue to deliver CPR until emergency medical professionals can take over.

If two or more people are available to provide aid to the victim, one should begin to deliver CPR immediately while the other calls 911 or other appropriate emergency number.

If you are alone and have immediate access to a telephone, call 911 first, then begin CPR when treating an adult. If the victim appears to have suffocated, for example as a result of drowning, you should perform one cycle of CPR first before calling 911. In babies and children, deliver five cycles of CPR before contacting emergency services.